First I want to clear that the massive extremism on Burmese Muslims is strongly condemned and the the silence of media, humane rights organizations is more shameful.

Social media is very active in the situation. Facebook users continually condemn and and express their anger about the heart shocking situation of Burmese Muslims. And thus I’m thankful to them all to raise voice against the “Burmese government”.

Human right abuses against Muslims is being carried out in Burma. I am only emphasizing on that social media images are fake.

But there are a few popular photos shared widely on social media websites like facebook and twitter. The photos shows casualties and killed people and the social media users spread it everywhere with the captions of “Burma Muslims, getting killed by Buddhists. But there is no truth in the captions of the photos. Read and see the following and find what is fact and what is fake.

UPDATED: This photo was shared a day before on facebook by many users, I saw it again today (June 08, 2015) with the caption یا اللہ برما کے مسلامانوں کی غیبی امداد فرما، آمین . This completely FAKE

FACT: The picture is recently published by many news websites about the arrest of  425 bikers. They were lined up and on the streets of Bangkok and arrested for illegal street racing. Here are some pics from the scene of the action. Check here the real story and many other pictures of the arrested bikers; source 1. (and Source 2 here) 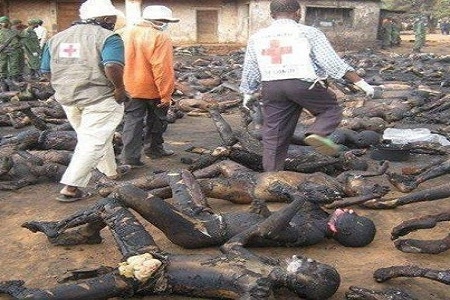 FAKE: This pictures is shared on many blogs and social media. The burnt people are shown as Burmese Muslims burnt by Buddhists. (Fake) .. I also found this picture showing Nigerian Christians burnt alive by Muslims.

FACT: The reality of the picture is; The explosion, on July 3, a tanker in the town of Sange, South Kivu, Democratic Republic of Congo (DRC) has resulted in 235 deaths. (Source 1, Source 2) 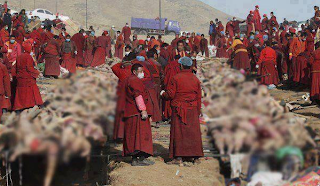 FAKE: This is one of the most shared photos even it is shared by some political and religious parties too. In the caption of the photo it has been shown that “The bodies of Muslims sloughed by Buddhists in Burma.”

FACT: But it is completely wrong and fake information what has been told in the caption. “This picture was taken in 2010 regarding Earthquake in China and Tibetans community help and rescue in China.” (Source 2) 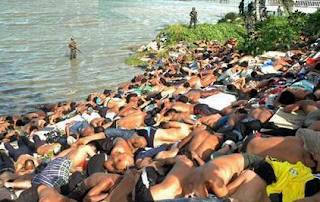 FAKE: A view of another widely spread picture with caption of “More then 1000 people killed in Burma” which also has a fake caption. In the caption of this photo the users have said; “Continuously massacre of Muslims in Burma by Buddhists, more than 1000 got killed yesterday.”

FACT: There is no fact in the caption of the photo. The photo is of year 2004 nearly 8 years old about riots in Thailand. – This picture shows protesters that were tear-gassed outside the Tal Bai police station in Bangkok. This is roughly 1,409.9 km away from Burma! What is grossly negligent about these photos is the factual ignorance of the hate these misleading photos can culminate. (Source: 80 Thai Muslims suffocate after arrest at protest) 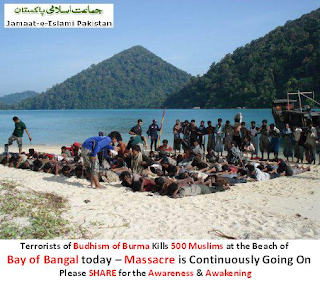 FAKE: This is another image (below) which was posted online, this time with an imprint of Jamaat-e-Islami on the top left . It reads “Terrorists of Budhism of Burma kills 500 Muslims”.

FACT: In reality, this image belongs to a Human Rights violation incident by the Thai authorities against the Rohingya ethnic minority of Burma. These refugees were detained for a few weeks and then sent off drifting into the sea. (Source)

(You may also like: Imran Khan writes to Ban Ki-moon over persecution of Rohingya Muslims) 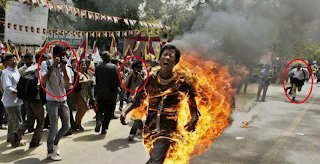 FAKE: Now there is another photo which hurts us so much. It is said in the caption of the below photo that; “This is media; @ A Muslim was burnt in Burma and journalists are taking pictures instead of saving him!! WTF.”

FACT: But fact of the above photo is that “A Tibetan protester had set himself on fire in protest prior to the arrival of Chinese president Hu Jintao in India.” (Source 2 DAWN)

Purpose of the article:

The purpose of the this article is just to clarify and tell you how social media ignite hatred and prejudice in our youth. – Of course the Burmese government and army are so much cruel to our Muslim brothers and sisters. And the silence of Muslims and international media and human rights organization is very shameful. The silence shows how anti-Muslim lobby is active in the media and international humane rights organization.

Social media and networking sites, if used properly, can be an impressive tool in spreading awareness amongst its users, but it can be an equally dangerous median as well if misused.

I just want to tell you the truth about some photos which are shared widely on the social media and blogs. So please don’t share such fake photos. It is my humble request to read first the article and try to understand what I have said and what I have tried to clarify. Then if you want give your comments.

Make use of this and become an active citizen like you are supposed to be in democracy so the government does not speak for you and take away your rights.

We the citizens of Pakistan implore on our Parliamentarians to familiarize themselves with this controversy and ask for proper debate and transparency about the Bill.

Hand picked and Top ten best selling wordpress magazine themes of newspaper, magazine, news and blogs styles for bloggers, media persons, artists and those all who want to be.

Good news for digital startups & entrepreneurs as FBR tax reforms reduced sales tax from 17% to 6% for eCommerce and online business in Pakistan.

I know many would have really born on this day but not all. I am pretty sure many of these birthdays are false.